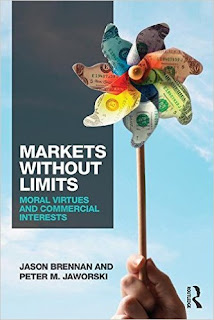 Georgetown professors Jason Brennan and Peter Jaworski have a book published through Routledge just this month titled Markets Without Limits: Moral Virtues and Commercial Interests. So far, the book is excellent in its defense against critics of commodification. The first few chapters consist mainly of abstract philosophical arguments explaining both the position(s) of various anti-commodification theorists and why they fail. In the chapter I'm currently reading, Brennan and Jaworski are beginning to get into the empirical claims of these theorists using peer-reviewed social science. Anti-commodification theorists tend to lay out several objections to markets, including their potential to:
However, there is the semiotic objection that participation "in markets can express or communicate certain negative attitudes, or is incompatible with holding certain positive attitudes...So, for instance, some hold that organ sales communicate the idea that the human body is a mere commodity--a piece of meat--and thus fail to show proper reverence for the body. Others say that markets in surrogacy services express the idea that women are mere incubation machines."[1] This semiotic objection carries over on to certain institutions within the market system, specifically businesses. Aside from both known and potential incidents of exploitation, asshole bosses, and the like (which should all be avoided or addressed), many critics implicitly and explicitly claim that the mere participation in business communicates a profit-driven corporate cosmology.


Yet, the view that monetary exchange--and, by extension, for-profit business--is an expression of the basest desires of human nature is largely a Western social construct. As Brennan and Jaworski write,

[Anti-commodification theorist Michael] Sandel complains that giving money instead of a non-monetary gift communicates a lack of concern. Yet there is evidence that this is merely a construct of current Western culture. For the Merina people of Madagascar, monetary gifts carry no such stigma of being impersonal or thoughtless. For the Merina, giving what Sandel calls "thoughtful" non-monetary gifts expresses no greater concern or thoughtfulness than giving cash of equal value...In Western cultures, we are now more likely to view gifts of money or gift certificates as impersonal or thoughtless, but even this is just a recent cultural development. For Americans, monetary gifts used to have a different meaning. Sociologist Viviana Zelizer says that in the 1870s-1930s United States, monetary gifts were seen as especially thoughtful...Zelizer's extensive work on the meaning of money and exchange, work spread out over multiple books, seems to show us that the supposed "profanity" of commodification or cash is not a deep fact about market economies as such, or about money as such, but a peculiarity of our own culture at this particular time...Like Zelizer, [sociologists Maurice Bloch and Jonathan Parry] conclude money and markets do not have the same meaning everywhere that they have here. Instead, the reason commodification seems so repugnant to us Westerners is because we Westerners tend to regard the sphere of exchange and money as a "separate and amoral domain." Bloch, Parry, and Zelizer say that we then mistakenly assume that this is just a "natural" or essential fact about money. We could think of money a different way...[2]

Bloch and Parry explain that for Westerners, "money signifies a sphere of "economic" relationships which are inherently impersonal, transitory, amoral and calculating." Yet, when the economy is seen as "'embedded' in society and subject to its moral laws, monetary relations are rather unlikely to be represented as the antithesis of bonds of kinship and friendship, and there is consequently nothing inappropriate about making gifts of money to cement such bonds."[3]

Similarly, the claim that business is somehow anti-social or morally detached (aside from claims regarding harm, exploitation, etc.) is also culturally constructed. Deirdre McCloskey has argued that the change in rhetoric toward business and markets led to the modern world and the staggering rise in living standards. Economist Nimish Adhia has documented the shift in Bollywood portrayals of businessmen from villains to heroes, reflecting the transformation of cultural ideologies regarding commerce and business.

Understanding the underlying prejudices against commerce is a key component to both secular and theological theories of business. For-profit business need not be seen as an expression of greed, but perhaps an exercise in civic virtue or even an act of consecration.

Over at the blog for AEI's Values & Capitalism, there's a short post on the value of mundane work using the U.S. version of The Office:

When Jim reflects on his time at Dunder Mifflin at the end of the show, he’s not struck by nostalgia—he genuinely appreciates the twelve years he spent working for that company. His job as a paper salesman allowed him to save money, buy a home, start a family, and eventually become an entrepreneur who helps start a sports marketing company. When a job is not particularly exciting, it is so easy to miss the merit in the mundane. But there is merit. That seemingly mundane work Jim did for all of those years created a network and the opportunity for him to pursue work he was passionate about. Although Jim Halpert is just a fictional character, his struggle with a job he was not passionate about is relatable for so many. Just because a job does not offer glory does not mean it’s not important.

Why I Fail To Write

I'm not an academic, but I play one on the Internet. A large number of my friends are professors and doctoral students. I try to write and read, mainly out of enjoyment. The other reason is a nagging feeling of obligation born out of a kind of intellectual "keeping up with the Joneses." It's stupid, it's probably unhealthy, and it makes no sense. But it is what it is. I sometimes tell myself that I'm more in the mold of management thinker Peter Drucker, who was described by one biographer as being "raised a thinker, not an academic."[1] That works for a few seconds until I remember that he was the Clarke Professor of Social Science and Management at Claremont Graduate School, lectured on Oriental art at Pomona College, sat on the Board of the Asian Art Museum in San Francisco, has a graduate school named after him, and is considered the father of modern management. My consistent sense of inadequacy and "falling behind" produces a fair amount of anxiety. This means that the things that inspire me also remind me of my shortcomings (and not in a humility-inducing way). It's a double-edged sword. Which is why I both hate and love the quote below from John Durham Peters' recent interview:

It would take a lot of thought to detail my research techniques but they include the following imperatives: write early in the morning, cultivate memory, reread core books, take detailed reading notes, work on several projects at once, maintain a thick archive, rotate crops, take a weekly Sabbath, go to bed at the same time, exercise so hard you can’t think during it, talk to different kinds of people including the very young and very old, take words and their histories seriously (i.e., read dictionaries), step outside of the empire of the English language regularly, look for vocabulary from other fields, love the basic, keep your antennae tuned, and seek out contexts of understanding quickly (i.e., use guides, encyclopedias, and Wikipedia without guilt)...I write on a desktop that is not connected to the internet, and generally do not go online (on a separate computer) before noon or later, if I can help it. I am still largely paper-dependent for any serious reading. I do not have a smartphone, and have an ancient TV set with the most minimal cable package.

Let's breakdown this incredible model to emphasize my utter failure as a wannabe academic:

There is a lot of wisdom in Peters' brilliantly messy model. I hope to have mastered at least some of these in future.