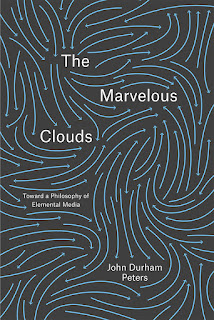 John Durham Peters of the University of Iowa has a newly published book titled The Marvelous Clouds: Toward a Philosophy of Elemental Media (Chicago: University of Chicago Press, 2015). The work is meant to be a wide-ranging and interdisciplinary meditation on media theory (it's also on my never-ending to-read list). In a recent interview about the book, Peters made the following observation:

The philosophy of technology is often infected by a romanticism that sees technology as a loss of an elemental relation to the cosmos. One of the key stories in the modern world, told by very different figures in diverse accents, is technology as a fall from grace. One of William Wordsworth’s last poems complained in 1849 that illustrated books and newspapers were displacing the ability to speak, pushing us back to the retrograde stage of cave paintings! I understand why such stories continue to be told about fearsome novelties (though none of us would count illustrated books as such today); certainly we need to be on guard against having our lives hijacked by forces out of our control. We urgently need critical counterweights to the promises of technoliberation spewed forth from Silicon Valley and elsewhere. (The job of the media historian is to puncture hype.)

But I fear tossing the baby with the bathwater. Technical infrastructures are not limits on our humanity, but its conditions. We can debunk silicon salvation without resorting to deluded conceptions of original purity. It is a weird side effect of new media to produce florid opt-out fantasies — you could spend hours watching beautiful videos on YouTube showing life off the grid. The urge to unplug is a real one, but often the cure and the disease are in cahoots. If you let the technology tell how to get out of it, you get all the more embedded in it; this urge to check out from but via technology is like a con artist that lulls you into trust by telling you he is conning you. The promised cure of being free of technology is usually just another technology that isn’t recognized as such. The choice is always the much more difficult one of which technologies and techniques to engage, not whether to abandon them altogether.

The book argues that media theory (like science fiction) is often theology by other means, and my insistence on deep technicity, like all basic visions of the human estate, inevitably has religious resonances. Theologically, I hold to a felix culpa, a fortunate fall. I do not place dolphins in Edenic bliss but somewhere between smart sea hippos and cyberspace surfers; they miss out on most of the powers that we technically inventive and immersive bipedals enjoy. Why would we want to go back to Eden? Living in a world rich with objects and subjects is a step forward, an opportunity, especially if we embrace the covenants that moor our sometimes errant ship. (Covenants are media that bind space and time.) Here my Mormonism, with its materialist metaphysics, media-friendly theology, affirmation of this-worldly embodiment as a step toward divinity, and rigorous sense of responsibility for choice, surely shines through my philosophy of technology.

This seems especially poignant given the photos of Joseph Smith's seer stone released by the LDS Church and the forthcoming Ensign article featuring one of them.[1] As Richard Bushman put it, "Seerstones don’t trouble me. I rather like them. They are part of Mormon materiality. They suggest there is a technology of revelation, somewhat resembling ipads, that assist us in getting divine intelligence. I don’t subscribe to Protestant stuffiness about proper ways for God to act and disreputable ones. I am willing to go along with the ways of God even if they are unconventional by enlightenment standards." Or, as another insightful article explained,

Seerstones spark a fire in my bones, a connection to an earlier, earthier, more tangible, and sacral-infused Mormonism. And that’s a Mormonism I need in my life right now. I gave my wife a blessing of healing tonight. I did not have a seerstone to guide my speech. But I did use a magic—sacred—oil, which I find to be directly analogous to Joseph’s stone. And I surely wouldn’t flinch should God grant me a white stone to use at such times—now or in a future heaven. I certainly hope that my whole soul can be attuned in the same manner, that I too can speak in the name of the Lord. Similarly, I feel a sense of holiness each time I dress in garments. I relish what the world can only sneer it—my magic underwear. Likewise, I cherish reading over and over the personal scripture of my Partriarchal Blessing. I’ll take Joseph’s “folk magic” right along with the enchanted world and goods it affords me over the stale, insipid world of constrained, condescending and self-congratulatory scientism—any day. But even if you don’t feel as I do—if you’re one of the many who have tamed and rationalized your experience with such artifacts of the Restoration—I hope you can appreciate and stand in an authentic relationship with our history. One need not be embarrassed by the “scandal” of the seerstone—whatever one’s epistemology—even if one can’t imagine our leaders using such things today. Instead, I hope we’re all grateful for these and the other “folk” elements of our religious tradition, and the goods—especially our experience of the sacred— that they (hopefully) continue to make available to all of us trying to build Zion today.

The divine and the mystical are far more tangible than we assume. And they can often be found in the ordinary technologies of our day-to-day lives.

1. For one of the best treatments of the subject of Joseph Smith, magic, and seership, see Mark Ashurst-McGee, "A Pathway to Prophethood: Joseph Smith Junior as Rodsman, Village Seer, and Judeo-Christian Prophet" (MA Thesis, Utah State University, 2000).
Posted by Walker Wright No comments:

Grace In All Things 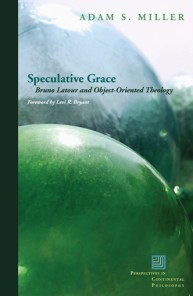 I've owned Adam Miller's book Speculative Grace for some time now.[1] I've been meaning to read it, along with the hundreds of other books on my never-ending, ever-growing to-read list. Yet, Adam's approach to Mormonism inspires me. It takes Mormonism's materialist metaphysics seriously. This affinity for the sacred in the mundane stands out in his other works, both published and forthcoming.[2] His book made its way closer to the top of my to-read list thanks to a recent review in BYU Studies Quarterly. The following stood out to me:

...[T]he materialistic universe envisioned by Latour and subtly proposed by Miller is in harmony with the restored gospel's ability to encompass "small-scale, localized" objects (3) that are both spiritual and material (D&C 131:7-8). For Latter-day Saints, spiritual and temporal things maintain a close interplay (Mosiah 2:41; D&C 29:32)...Miller presents an object-oriented force of grace that permeates all these equal things. This flat structure of the universe is the context in which Miller consistently animates the principle of grace. Miller's grace is pluralistic, immanent, dynamic, and even ordinary, thereby transforming its meaning to enliven it with heightened relevance.

...Miller's grace could function in LDS and certain other theologies in the sense that an anthropomorphic God is able to have relationships, grant blessings, and make covenants with his children. As Miller explains, "God is an object among a multitude of objects" (47), or, to use a saying commonly attributed to Lorenzo Snow, "As man now is, God once was; as God is now man may be."[3]

This view of grace can and should shape our outlook of everyday tasks (including work). Not only does it infuse the ordinary with the divine, but it also may play a role in bridging classical and materialist metaphysics.