Groundhog Day: Salvation in the Mundane 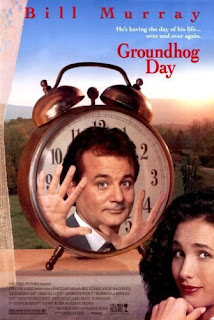 I recently finished political scientist Charles Murray's short book The Curmudgeon's Guide to Getting Ahead. The book contains a lot of practical advice, but I read it more out of curiosity than anything (given Murray's often controversial academic work). Perhaps the most satisfying element of the book was his ending tip: Watch Groundhog Day Repeatedly. Murray describes the film as "a profound moral fable that deals with the most fundamental issues of virtue and happiness."[1] For him, it acts as an excellent substitute for Aristotle's Nicomachean Ethics.[2] And I can't really argue with his reasoning:

Director and cowriter Harold Ramis estimates that the movie has to represent at least thirty or forty years’ worth of days. We see only a few dozen of them, ending when Bill Murray’s character has discovered the secrets of human happiness. Without the slightest bit of preaching, Ramis shows the bumpy, unplanned evolution of his protagonist from a jerk to a fully realized human being—a person who has learned to experience deep and lasting satisfaction with life as a whole even though he has only one day to work with.

Ramis’s own understanding of the story he is telling is sophisticated and subtle. That’s why you need to watch the film more than once. You are sure to pick up subtexts the second time that you didn’t get the first time. And you’ll see even more when, after giving yourself a rest, you watch it a third time. I’ve lost count of how many times I’ve watched Groundhog Day, but I’ve always seen something new.

This recognized genius of Groundhog Day reminded me an essay by Adam Miller in his book Rube Goldberg Machines. In it, he makes an incredible insight particular to Mormonism:

In general, the complaint about Mormonism is that it is all too mundane.[4] God, for Mormons is not supra-mundane. God has a body? Fingers and toes? He's married? He must, everyday, tie the sash on his white robe? His immortal lungs perpetually expand and contract? Heaven, too, for Mormons, is not supra-mundane. Heaven? Where people are still married, still work, still have children, still change diapers, still share casseroles? Heaven, for Mormons, is what seals our union with the mundane rather than terminates it. Leave it to Mormonism to see the nihilistic claim that there is nothing but the aching specificity of this repetition and raise it to the power of infinity. Leave it to Mormonism to claim that even in heaven we'll have to button and unbutton our shirts, show all our work, suffer papers cuts, and--of course, forever and ever again--breathe.

In the end, Phil Connor turns out to be the Mormon hero par excellence. Let it snow, Phil finally says. Let the weather rain down. Shucked bare of hope for something else, he is able to invert the nihilism of life's repetition into compassion only after its rough-edged iteration has worn his heart smooth. Deprived of reward and consequence--of any hope that his works could save (or damn) him--he, in the end, comes back to the work for its own sake. He attends. And by the time February 3rd arrives, it is clear that Phil has not been saved from the mundane but for it.

"If we go to hell," Joseph Smith claimed, "we will turn the devils out of doors and make a heaven of it." If life is repetition, I am claiming, then we must turn our daydreams out of doors and fashion a heaven from it...No one is coming to save you from the grace of the mundane. Jesus came to give this grace not take it away.[5]

Finding salvation in the mundane (and ultimately being saved for it) should change the way we look at both it and the nature of the Divine.

4. "Only taken in the collective do the assaults on Mormonism's heresies reveal their common theme: the disintegration of that distance that separates the sacred and the profane, that defines religious experience as unfathomable mystery, that constitutes religious feeling int he presence of the ineffable, that renders such terms as holiness, worshipfulness, and reverence as constituting the very essence of religion. Such distance comes close to being the sine qua none of all Western religious faith and practice" (Terryl L. Givens, The Viper on the Hearth: Mormons, Myths, and the Construction of Heresy. New York: Oxford University Press, 1997, 82).