"Masonry Stands Up For the Nobility of Labor": Masonry and Mormonism

I'm extremely excited for the forthcoming book by Cheryl Bruno and Joe Swick III titled Method Infinite: Freemasonry and the Mormon Restoration. Having seen the outline and summary of the arguments, I can say that this will truly help readers understand just how important and intertwined Masonry was to early Mormonism. Granted, I still need to read Michael Homer's Joseph's Temples: The Dynamic Relationship between Freemasonry and Mormonism (which I actually have), but I think Cheryl and Joe's is going to be on a much grander scale than Homer's book. I think these books will be influential in my own work on a Mormon theology of work.

Case in point: the following comes from Albert Pike's 1871 book Morals and Dogma. It describes the 22nd degree: the Knight of the Royal Axe, Prince of Libanus. The excerpt is very long, but I thought it was worth posting. The Masonic view of labor is very similar to what you find in Mormonism (or what was said about Mormonism) and was likely a major influence on its view of work:

SYMPATHY with the great laboring classes, respect for labor itself, and resolution to do some good work in our day and generation, these are the lessons of this Degree, and they are purely Masonic. Masonry has made a working-man and his associates the Heroes of her principal legend, and himself the companion of Kings. The idea is as simple and true as it is sublime. From first to last, Masonry is work. It venerates the Grand Architect of the Universe. It commemorates the building of a Temple. Its principal emblems are the working tools of Masons and Artisans. It preserves the name of the first worker in brass and iron as one of its pass-words. When the Brethren meet together, they are at labor. The Master is the overseer who sets the craft to work and gives them proper instruction. Masonry is the apotheosis of WORK. 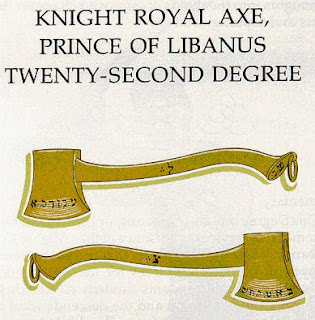 It is the hands of brave, forgotten men that have made this great, populous, cultivated world a world for us. It is all work, and forgotten work. The real conquerors, creators, and eternal proprietors of every great and civilized land are all the heroic souls that ever were in it, each in his degree: all the men that ever felled a forest-tree or drained a marsh, or contrived a wise scheme, or did or said a true or valiant thing therein. Genuine work alone, done faithfully, is eternal, even as the Almighty Founder and World-builder Himself. All work is noble: a life of ease is not for any man, nor for any God. The Almighty Maker is not like one who, in old immemorial ages, having made his machine of a Universe, sits ever since, and sees it go. Out of that belief comes Atheism. The faith in an Invisible, Unnamable, Directing Deity, present everywhere in all that we see, and work, and suffer, is the essence of all faith whatsoever.

...[Man's] only true unhappiness should be that he cannot work, and get his destiny as a man fulfilled. The day passes swiftly over, our life passes swiftly over, and the night cometh, wherein no man can work. That night once come, our happiness and unhappiness are vanished, and become as things that never were. But our work is not abolished, and has not vanished. It remains, or the want of it remains, for endless Times and Eternities.

...To work is to try himself against Nature and her unerring, everlasting laws: and they will return true verdict as to him. The noblest Epic is a mighty Empire slowly built together, a mighty series of heroic deeds, a mighty conquest over chaos. Deeds are greater than words. They have a life, mute, but undeniable; and grow. They people the vacuity of Time, and make it green and worthy.

Labor is the truest emblem of God, the Architect and Eternal Maker; noble Labor, which is yet to be the King of this Earth, and sit on the highest Throne. Men without duties to do, are like trees planted on precipices; from the roots of which all the earth has crumbled. Nature owns no man who is not also a Martyr. She scorns the man who sits screened from all work, from want, danger, hardship, the victory over which is work; and has all his work and battling done by other men; and yet there are men who pride themselves that they and theirs have done no work time out of mind.

...There is a perennial nobleness and even sacredness in work. Be he never so benighted and forgetful of his high calling, there is always hope in a man who actually and earnestly works: in Idleness alone is there perpetual Despair. Man perfects himself by working. Jungles are cleared away. Fair seed-fields rise instead, and stately cities; and withal, the man himself first ceases to be a foul 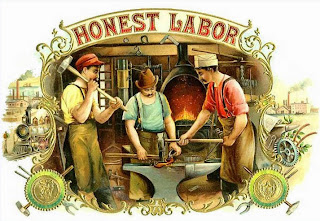 unwholesome jungle and desert thereby. Even in the meanest sort of labor, the whole soul of man is composed into a kind of real harmony, the moment he begins to work. Doubt, Desire, Sorrow, Remorse, Indignation, and even Despair shrink murmuring far off into their caves, whenever the man bends himself resolutely against his task. Labor is life. From the inmost heart of the worker rises his God-given Force, the Sacred Celestial Life-essence, breathed into him by Almighty God; and awakens him to all nobleness, as soon as work fitly begins. By it man learns Patience, Courage, Perseverance, Openness to light, readiness to own himself mistaken, resolution to do better and improve. Only by labor will man continually learn the virtues. There is no Religion in stagnation and inaction; but only in activity and exertion. There was the deepest truth in that saying of the old monks, "laborare est orare." "He prayeth best who loveth best all things both great and small;" and can man love except by working earnestly to benefit that being whom he loves?

"Work; and therein have well-being," is the oldest of Gospels; unpreached, inarticulate, but ineradicable, and enduring forever. To make Disorder, wherever found, an eternal enemy; to attack and subdue him, and make order of him, the subject not of Chaos, but of Intelligence and Divinity...Let the weary cease to think that labor is a curse and doom pronounced by Deity, Without it there could be no true excellence in human nature. Without it, and pain, and sorrow, where would be the human virtues?

...Duty is with us ever; and evermore forbids us to be idle. To work with the hands or brain, according to our requirements and our capacities, to do that which lies before us to do, is more honorable than rank and title. Ploughers, spinners and builders, inventors, and men of science, poets, advocates, and writers, all stand upon one common level, and form one grand, innumerable host, marching ever onward since the beginning of the world: each entitled to our sympathy and respect, each a man and our brother.

...Masonry stands up for the nobility of labor. It is Heaven's great ordinance for human improvement. It has been broken down for ages; and Masonry desires to build it up again. It has been broken down, because men toil only because they must, submitting to it as, in some sort, a degrading necessity; and desiring nothing so much on earth as to escape from it. They fulfill the great law of labor in the letter, but break it in the spirit,: they fulfill it with the muscles, but break it with the mind...Even when [the labor's] end is hidden from him, it is not mere blind drudgery. It is all a training, a discipline, a development of energies, a nurse of virtues, a school of improvement.

...The great law of human industry is this: that industry, working either with the hand or the mind, the application of our powers to some task, to the achievement of some result, lies at the foundation of all human improvement. We are not sent into the world like animals, to crop the spontaneous herbage of the field, and then to lie down in indolent repose: but we are sent to dig the soil and plough the sea; to do the business of cities and the work of manufactories. The world is the great and appointed school of industry. In an artificial state of society, mankind is divided into the idle and the laboring classes; but such was not the design of Providence. Labor is man's great function, his peculiar distinction and his privilege.

...What is there glorious in the world, that is not the product of labor, either of the body or of the mind? What is history, but its record? What are the treasures of genius and art, but its work? What are cultivated fields, but its toil? The busy marts, the rising cities, the enriched empires of the world are but the great treasure-houses of labor. The pyramids of Egypt, the castles and towers and temples of Europe, the buried cities of Italy and Mexico, the canals and railroads of Christendom, are but tracks, all round the world, of the mighty footsteps of labor. Without it antiquity would not have been. Without it, there would be no memory of the past, and no hope for the future...It honors the Worker, the Toiler; him who produces and not alone consumes; him who puts forth his hand to add to the treasury of human comforts, and not alone to take away.

...God has not made a world of rich men; but rather a world of poor men; or of men, at least, who must toil for a subsistence. That is, then, the best condition for man, and the grand sphere of human improvement.

...If wealth were employed in promoting mental culture at home and works of philanthropy abroad; if it were multiplying studies of art, and building up institutions of learning around us; if it were in every way raising the intellectual character of the world, there could scarcely be too much of it. But if the utmost aim, effort, and ambition of wealth be, to procure rich furniture, and provide costly entertainments, and build luxurious houses, and minister to vanity, extravagance, and ostentation, there could scarcely be too little of it. To a certain extent it may laudably be the minister of elegancies and luxuries, and the servitor of hospitality and physical enjoyment: but just in proportion as its tendencies, divested of all higher aims and tastes, are running that way, they are running to peril and evil.

...To aid in securing to all labor permanent employment and its just reward: to help to hasten the coming of that time when no one shall stiffer from hunger or destitution, because, though willing and able to work, he can find no employment, or because he has been overtaken by sickness in the midst of his labor, are part of your duties as a Knight of the Royal Axe. And if we can succeed in making some small nook of God's creation a little more fruitful and cheerful, a little better and more worthy of Him,--or in making some one or two human hearts a little wiser, and more manful and hopeful and happy, we shall have done work, worthy of Masons, and acceptable to our Father in Heaven.