David Feitler, Senior Program Manager at NineSigma and Program Director for the Ohio Third Frontier Program, has a blog post at the Harvard Business Review on team diversity. Feitler explains that

Ben Jones and colleagues at the Kellogg Business School of Northwestern University published a paper in Science last year focusing on diversity in the production of new knowledge, as reflected in the research literature. Looking for patterns across some 17.9 million papers indexed in Thomson Reuter’s Web of Science, they demonstrated that the most influential papers (most highly cited) were those that exhibited an intrusion of interdisciplinary information. They also found that groups were more likely to foster these intrusions than solo researchers. This is entirely consistent with Fleming’s findings for industry, and his attempts to dispel some of the mythology around lone inventors.

"It isn’t all about novelty or conventionality. It’s about both," Jones explains. "You want to be grounded in something that’s well understood and yet be adding in the piece that’s truly unusual. And if you do those two things [and] stretch yourself in both directions, then you radically increase your probability of hitting a homerun.” Co-author Brian Uzzi states, "Many of these novel combinations are really two conventional ideas in their own domains. You’re taking established, well-accepted ideas, which is a wonderful foundation—you need that in science. But when you put them together: wow. That’s suddenly something really different.” Teams were more likely to produce this "virtuous mix" by bringing diverse specialities together. While we often speak of diversity of people, it is really a diversity of disciplines and experiences.

Learning is his mind's pleasure, a gift to share with his readers, not an invitation to pomposity. The Druckers raised an intellectual, not an academic. For sixty years Drucker has taken on a new subject every three or four years and read up on it to the capacious limits of his curiosity. One year it might be Japanese art...another year it could be sixteenth-century finance; yet another the history of technology or of work--or of American statesmen or of British rule in India. He recommends intellectual omnivorousness as a form of self-renewal. Certainly it has worked for him.[1]

Perhaps this is why we are told to "seek diligently...yea, seek ye out of the best books words of wisdom; seek learning, even by study and also by faith" (D&C 88:118). Innovation, creativity, inspiration, and revelation seem to be intertwined. To be revelators and ministers, we must be interdisciplinarians as well. Drawing from D&C 88, Elder John A. Widtsoe sums it up this way:

And in the earth—Everything pertaining to the cultivation of the soil.

And under the earth—Mineralogy, geology, etc.

Things which have been—History, in all its branches.

Things which must shortly come to pass—Prophecies.

Things which are at home and abroad—Domestic and foreign politics.

Wars—perplexities—judgment—The signs of the times, by which the observer may know that the day of the Lord is at hand.

A knowledge of countries and kingdoms—physical and political geography, languages, etc.

These studies, the Lord considers necessary...God does not require all His servants to become doctors, or professors, or even profound students of these subjects, but He expects them to know enough of these things to be able to magnify their callings as His ambassadors to the world.

The knowledge we gain here is not trivial. And we should seek more of it. 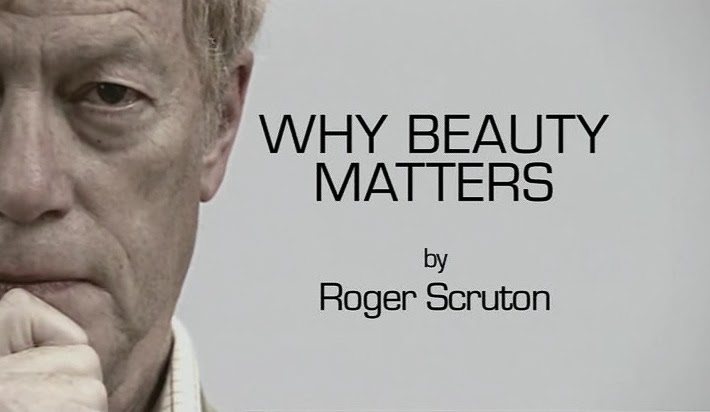 
The above comes from philosopher Roger Scruton's BBC special Why Beauty Matters. Elsewhere, Scruton has argued for "a more comprehensive view of the city as an aesthetic creation. Cities degenerate when they are seen as mere instruments, temporary structures that are abandoned when their purpose is fulfilled."[1] While recognizing architecture as a "useful art"--i.e. possessing a function beyond aesthetics--Scruton points out that "a functional building" that fulfills its function "is not, for that reason, beautiful. In referring to architecture as a useful art we are emphasizing another aspect of it--the aspect that lies beyond utility. We are implying that a work of architecture can be appreciated not only as a means to some goal, but also as an end in itself, as a thing intrinsically meaningful."[2] The "knowledge of architectural function is important to the judgment of beauty; but architectural function is bound up with the aesthetic goal...In other words, when we take beauty seriously, function ceases to be an independent variable, and becomes absorbed into the aesthetic goal."[3]

A lack of beauty can have a negative impact. For example, one teacher in the 1960s Boston inner-city school system collected letters from his fourth grade class describing "what they saw in front of them each day when they came into school." The letters consistently mentioned how dirty and rundown the classroom appeared. As this teacher explained,

The insult to aesthetics, the affront to cleanliness and harmony and sweetness, are continuing realities as well for children who must go each morning into morbid-looking buildings in which few adults other than their teachers would agree to work day after day...There is no misery index for the children of apartheid education. There ought to be; we measure almost every other aspect of the lives they lead in school. Do kids who go to schools like these enjoy the days they spend in them? Is school, for most of them, a happy place to be?[4]

Aesthetics can and should play a role within organizations. While "open-plan" offices have been the rage since the 1990s (with its focus on collaboration), evidence continues to mount that this design can be distracting and unproductive. Google has in some sense attempted to merge the functional with the beautiful. As one expert put it, "Aesthetics are just the first layer and they are only going to work if they are aligned with deeper levels of change."[4] In other words, "the aim is to respond to the business and cultural drivers of an organization." There is some research that demonstrates aesthetics (apart from ergonomics) can have an impact on employee well-being.[5]

Zackary Berger and Samuel Brown make an excellent case for aesthetics in hospital design in the Annals of Internal Medicine:

The Johns Hopkins Hospital (JHH) and Massachusetts General Hospital (MGH), 2 of the most prestigious training hospitals in the United States, both harbor vestigial figures that remind us of what hospitals used to be. The Johns Hopkins Hospital is home to a much-visited statue of Jesus, the divine healer. With the recent hospital expansion, this statue feels like a quaint relic relegated to an old hospital building where important committees consider patients in the abstract but never in reality. At MGH, the actual body of an Egyptian scribe from the Ptolemaic period, Padihershef (Padi), stands watch over the illustrious Ether Dome, far from patient and visitor traffic, in the figurative shadow of recent massive expansions of the hospital’s physical plant. Both Jesus and Padi represent an age when medicine was often found in the context of specific faith and cultural traditions. Part church, part museum, part distinctive cultural space, the earliest hospitals were often operated by religious order or religiously minded civic groups to care for the desperately ill who were too poor to receive care in their homes.[6]

Technological advances and upgrades have left many hospitals "massive and modular, generic and cold." Patients no longer "imagine themselves as human beings," but instead as "collections of medical problems waiting to be solved."[7] Berger and Brown suggest that hospitals include "more living things, more spaces to sit quietly and reflect, perhaps even specific works of art or curios."[8]


When it comes to the ancient triad of Truth (science), Goodness (ethics), and Beauty (aesthetics), most organizations most of the time get the first two right. It's time to bring in the third.

4. Some researchers have suggested that invoking a sense of "awe" in students could help children develop a sense of purpose. Awe is typically generated from an experience with beauty. This "aesthetic experience" is what Sir Ken Robinson describes as "one in which your senses are operating at their peak, when you're present in the current moment, when you're resonating with the excitement of this thing you're experiencing, when you're fully alive."