The First Vision and Forgiveness 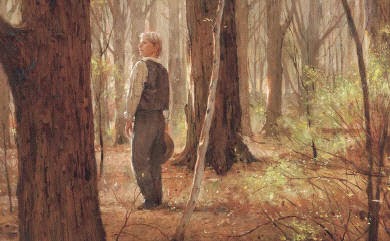 Due to a friend's request as well as the LDS Church's new Gospel Topics article on the "First Vision Accounts," I thought I'd post a letter I wrote to my sister-in-law while she was serving her mission in Chicago. I've modified the format for citations and added a couple extra resources in the footnotes. My sister-in-law wrote the following:

I did have a question for you. Something that the Anti guy asked was "How could Joseph Smith have seen God and not been cleansed from his sins?" He said that many of the ancient prophets had been cleansed first and that it would be impossible that Joseph Smith could have seen God without being cleansed. I know that he had to have been transfigured, but thats all I really understand about that. Do you have any info on this particular argument?

Here was my response:

That I do. Joseph Smith's first written account of his vision (1832) reads, 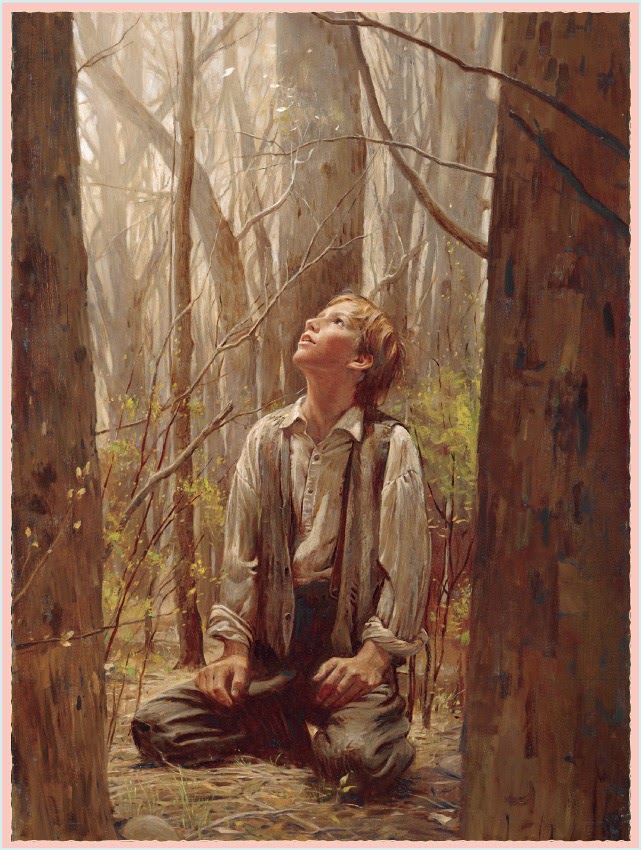 ...while in the attitude of calling upon the Lord in the 16th year of my age a piller of light above the brightness of the sun at noon day come down from above and rested upon me and I was filled with the spirit of God and the Lord opened the heavens upon me and I saw the Lord and he spake unto me saying, "Joseph my son thy sins are forgiven thee..."[1]

Forgiveness of sins was actually the emphasis of Joseph's first account. This is what D&C 20:5 means when it says, "After it was truly manifested unto this first elder that he had received a remission of his sins..." Compare this portion of D&C 20 to Joseph Smith - History. The "manifestation" regarding the "remission of sins" spoken of in D&C 20 took place before Moroni. It is a reference to the First Vision. It must be recognized that the vision at first was understood as a personal revelation about his personal salvation. The full impact was not realized until the official account:

[Smith] was most impressed with [the vision's] assurance that he was personally forgiven of his sins and the instruction that he was to join none of the existing churches...The 1832 account paints a picture of the boy's concern for his own soul and his sense of forgiveness as the Lord speaks to him. Later there is more specific indication of the background of sectarian controversy, the desire to know which church was true, and the divine instructions that Joseph Smith himself would later be an instrument in restoring the true church to the earth...If the later version was different, this was not a result of inventing an experience out of whole cloth, as an unscrupulous person might readily have done, but rather of reexamining an earlier experience and seeing it in a different light. As a teen-ager Smith had probably seen the experience primarily as a relief from anxiety about his sins and concerns about the jarring claims of different sects. By 1838 Smith was head of a church, his prophetic status challenged both from without and from within.[2]

The First Vision was not heavily circulated and was therefore not central to the Church in the earliest days.[3] However, external sources confirm that Smith's First Vision was known early on and remained fairly consistent with and accurate to their earliest tellings.[4] Smith's visionary report wasn't entirely unique for its time. Reports of visionary experiences were well known. The pastor (mentioned in Joseph Smith - History) that dismissed Smith's vision as a boy would have been familiar with these experiences. It was most likely because of this visionary culture and its negative reputation that Smith's earliest visions (First Vision, Moroni, etc.) were downplayed originally. The Book of Mormon was the main focus in early missionary efforts, with little to no mention of Smith's visions. If you think about it, we don't even have a detailed account of the angelic restoration of the Melchizedek priesthood. This distancing from the contemporary visionary culture combined with the similiarities it shared probably aided in Mormonism's success and appeal. Ultimately, however, Mormonism transcended and outlasted them all.[5]

The Lord declared Joseph to be forgiven within the context of the vision. Moroni did likewise years later. Compare this to Isaiah 6, in which Isaiah's lips are cleansed by the angel with a coal from the temple altar. In this sense, the prophet becomes a member and messenger (literal translation for Hebrew malak; also translated "angel") of the divine council. Joseph Smith's accounts fit the ancient concept, though their expression more so conform to 19th-century visionary literature. The revelations through Joseph Smith also contain these Hebraic notions. For example, the Book of Mormon fits the ancient Hebrew concept perfectly. Notice that 1 Nephi opens with Lehi's vision of, introduction into, and calling by the divine council: "And being thus overcome with the Spirit, he was carried away in a vision, even that he saw the heavens open, and he thought he saw God sitting upon his throne, surrounded with numberless concourses of angels in the attitude of singing and praising their God" (1 Ne. 1:8). This parallels ancient throne theophanies like Ezekiel, Micaiah, Isaiah, and others. It also compares favorably with ancient pseudepigrapha, many of which were unknown to the scholars of Joseph Smith's day.[6] While no throne is mentioned in Smith's First Vision accounts, his 1835 version does say, "I saw many angels in this vision."[7] Smith recorded, "I had actually seen a light, and in the midst of that light I saw two Personages, and they did in reality speak to me" (JS-H 1:25). David Bokovoy writes,

Ancient Israel witnessed its fair share of false prophets who feigned divine authority in their predictions. Hence Lehi's biblical contemporary, the prophet Jeremiah, specifically identified a true messenger as one who had "perceived and heard [God's] word" (Jeremiah 23:18). In Jeremiah 23:18, "perceived" is the King James translation for the Hebrew verb raʾah, which means, in its most basic sense, "to see." Therefore, according to the stipulations provided by Jeremiah, a true prophet had both seen and heard God's word. In his own account, Nephi demonstrates an evident awareness of this biblical standard. Immediately after describing his father Lehi's experience with a biblical-like pillar of fire, Nephi specifically notes that Lehi "saw and heard much; and because of the things which he saw and heard he did quake and tremble exceedingly" (1 Nephi 1:6). Nephi also informs his readers that Lehi "went forth among the people, and began to prophesy and to declare unto them concerning the things which he had both seen and heard, ...and he testified that the things which he saw and heard...manifested plainly of the coming of a Messiah" (1 Nephi 1:18—19). In this opening chapter of the Book of Mormon, Nephi matches his apparent effort to portray Lehi as a true prophet, who had seen and heard God's word, with a continuous repetition of the biblical designation my father.[8]

Both the Book of Mormon and Joseph Smith's experience meet the standard. There was an article by Old Testament scholar Margaret Barker and Kevin Christensen called "Seeking the Face of the Lord: Joseph Smith and the First Temple Tradition" in Joseph Smith, Jr.: Reappraisals after Two Centuries.[9] ...In it, Barker reviews the ancient biblical concept of "seeing God" in the temple. Christensen takes her views and applies them to Joseph Smith's own temple theology and visionary experiences. It turns out that Smith's ideas fit very nicely into Israel's First Temple theology. Barker (who is actually Methodist) drew the same conclusion elsewhere: 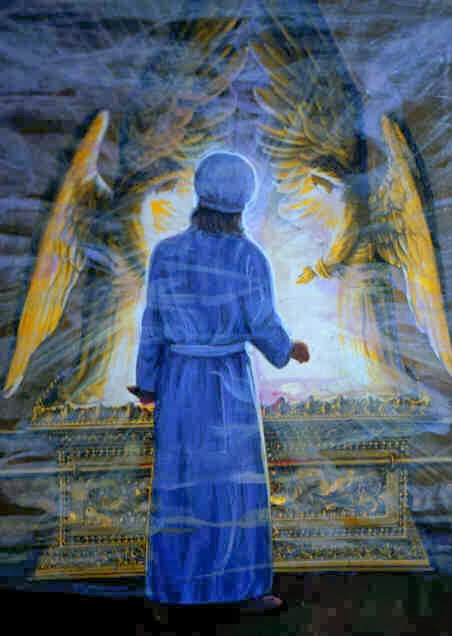 We now recognize that King Josiah enabled a particular group to dominate the religious scene in Jerusalem about 620 BCE: the Deuteronomists. Josiah’s purge was driven by their ideals, and their scribes influenced much of the form of the Old Testament we have today, especially the history in 1 and 2 Kings. The Deuteronomists denied that anyone had a vision of the Lord (Deuteronomy 4:12), they denied that anyone had revelations from heaven, and they insisted the Ten Commandments were all that was necessary (Deuteronomy 30:8, 11–14). Nothing more was to be added to them (Deuteronomy 5:22). Prophecies were genuine only if they had already been fulfilled and had no more power (Deuteronomy 18:21–22). The Deuteronomists had no place for angels, and so they did not use the title "Lord of Hosts." These were the minds that eventually led to the closed canon of scripture and the cessation of prophecy. But the prophets did have visions of the Lord and the angels, they did speak in the name of the Lord, and their unfulfilled prophecies were carefully preserved. Not everyone shared the views of the Deuteronomists, but the writings of these other people are often outside the Bible.[10]

As for transfiguration, Orson Pratt's rendition of Smith's First Vision in his An Interesting Account of Several Remarkable Visions and of the Late Discovery of Ancient American Records (1840, pg. 5) states that Smith was "enveloped" in the pillar of light and that it "produced a peculiar sensation throughout his whole system." Joseph himself said that, following the vision, he "found [himself] lying on [his] back" with "no strength" (JS-H 1:20). This is similar to Moses' experience in Moses 1:9-10.

All in all, Joseph Smith's First Vision fits ancient visions quite well. But more importantly, it invites us to seek similar experiences and a remission of our own sins through the Savior.

2. Leonard J. Arrington, Davis Bitton, The Mormon Experience: A History of the Latter-day Saints (New York: Knopf, 1979), 6-8. However, we shouldn't stress the difference in emphasis too much, especially when we analyze the Methodist context from which Smith's visions emerged. "While forgiveness for his sins preoccupied the earlier account, and the concern with which church was right consumes the later narrative, within the Methodist tradition, the two were not mutually exclusive questions. In fact, they were intimately tied together. Perhaps Joseph Smith asked “which of all the sects was right” precisely because he felt that forgiveness of his personal sins was intimately tied to his joining a certain church" (Christopher C. Jones, "The Power and Form of Godliness: Methodist Conversion Narratives and Joseph Smith's First Vision," Journal of Mormon History 37:2, 2011: 110-111). Historian Don Bradley has argued that it was after Joseph's First Vision that he became a seer. See his 2013 FAIR presentation "The Original Context of the First Vision Narrative: 1820s or 1830s."