Celebrating Women at the Woman's University

As I recently stated, my wife (along with my sister) graduated from Texas Woman's University (founded in 1901 as Girls Industrial College) this spring. While the achievements of TWU were recognized by the speakers--including the amount of degrees awarded by them to women--I was surprised that the staggering rise of female college graduates was not mentioned. As economist Mark J. Perry has noted, data from the Department of Education shows that women have earned 9.7 million more college degrees than men since 1982. 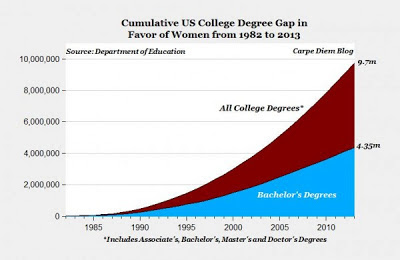 To break it down even further, a longitudinal survey from the Bureau of Labor Statistics sampled 9,000 young men and women between the ages of 23 and 25 on their educational attainment. The chart below (also prepared by Mark Perry) demonstrates the huge disparity between men and women. 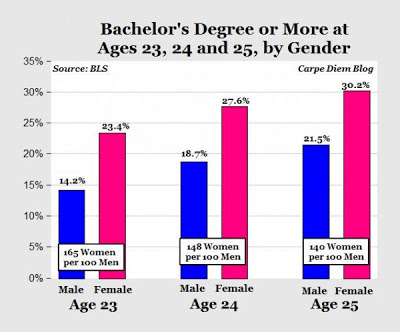 Perry breaks the fields down as follows: 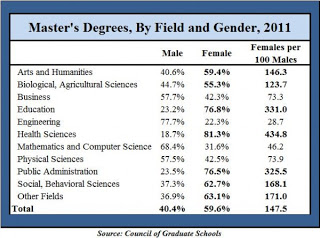 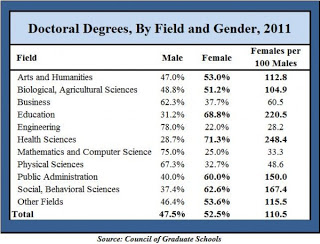 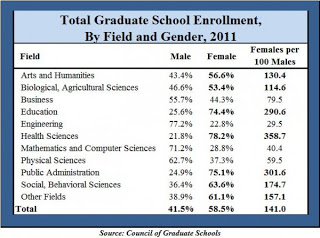 Men still dominate the fields of business, engineering, math and computer science, and physical science, while women have taken over virtually everything else.

So, congratulations to not only my wife and sister, but to women nationwide.

In Charles Duhigg's fascinating The Power of Habit,[1] he references the 2005 Kenyon College commencement speech "This Is Water" by writer David Foster Wallace. After taking his reader through the evidence of unconscious habits--including cue, routine, and reward--Duhigg presents the power of habit as the "water" of Wallace's speech.


One portion that stood out to me was Wallace's point on being able to see "a crowded, hot, slow, consumer-hell type situation as not only meaningful, but sacred, on fire with the same force that made the stars: love, fellowship, the mystical oneness of all things deep down...Because here's something else that's weird but true: in the day-to-day trenches of adult life, there is actually no such thing as atheism. There is no such thing as not worshipping. Everybody worships...But please don't just dismiss it as just some finger-wagging Dr. Laura sermon. None of this stuff is really about morality or religion or dogma or big fancy questions of life after death. The capital-T Truth is about life BEFORE death." What makes this even more poignant is the fact that Wallace lost his battle with depression a few years later when he hanged himself. Some may say that this invalidates everything he said. But to me, this just makes his concluding remarks all the more powerful: "It is unimaginably hard to do this, to stay conscious and alive in the adult world day in and day out." Wallace did not see himself as the wise old fish who had conquered his natural default setting. He was simply recognizing the difficulty of overcoming this default setting, but also the possibility of doing so. The more I think about the concept of Zion, the more I'm convinced that what will bring it about is not any particular economic system, but our ability to sacralize the here and now. As Terryl Givens noted in his PBS interview,

One of the hallmarks of Mormonism, and of Joseph Smith in particular, is the collapse of sacred distance. Joseph insistently refused to recognize the distinctness of those categories that were typical in traditional Christianity, the sense that there is an earthly and a heavenly, a bodily and a spiritual...He did this in ways as divergent as commenting on the fact that God himself was once as we are, that he is embodied; by arguing that when revelations came to him, they came through vehicles as palpable and earthly as seer stones, or Urim and Thummim, or gold plates...Every time that we think we have found an example of what we think is a dichotomy, Joseph collapses it into one.[2]

This should lead Mormons to embrace the reinvention of the sacred put forth by some secular scholars. When we begin to see the divine in the little things we do--business transactions, shopping, work commutes--we begin to change the nature of the acts.[3] In one of the most enlightening paragraphs (for me, anyway) penned in recent memory, Nathaniel Givens provides the perfect analogy for this diamond-in-the-rough approach to the divine:

Religious experiences aren’t real unless they are authentic. It’s easy to go off and meditate or take a pilgrimage and feel transcendent, but it’s mostly a waste of time. You need something to bring the feeling of sublime transcendence into your lived life. You need to somehow make commuting to work or sitting in your cubicle a sacred experience...It’s like listening to your favorite song on the radio and wanting to sing along even if you can’t sing. You  know that the song is beautiful and you know that your voice isn’t. You know you can’t actually contribute. You know that there’s nothing you can do that will match the beauty of what you’re listening to. But you sing anyway. You sing until your throat is raw and the singing may be awful, but the yearning, the longing, the desire to join yourself to something beautiful: that never is.

"Wherefore, verily I say unto you that all things unto me are spiritual" (D&C 29:34). It's easy to see an abstract Zion as a meaningful goal. It is quite different to find meaning in the menial tasks of building such a community. I'm beginning to think that until we can do the latter, the former will remain out of reach.

2. Thanks to his son Nathaniel for bringing the quote to my attention. Other Christian theologians have recently argued for a similar metaphysical monism. For example, see N.T. Wright, Surprised by Hope: Rethinking Heaven, the Resurrection, and the Mission of the Church (New York: HarperOne, 2008).

3. For example, see the interview with business expert Tony Golsby-Smith at the Centre for Public Christianity on the divine/humanist aspect of work, creativity, and innovation.
Posted by Walker Wright 2 comments:

WWE - Like a Boss: A Critique of Nibley's "Leaders to Managers"

In my latest Worlds Without End post, entitled "Like a Boss: A Critique of Nibley's 'Leaders to Managers'," I analyze and critique Hugh Nibley's "Leaders to Managers: The Fatal Shift." Despite my love for Nibley, his views on management and business I find to be rather inane. See what you think. It was a fun post to write, considering I was able to mix my education in management with my interest in theology.
Posted by Walker Wright No comments:

My wife graduated today. As I've posted before, I'm very proud of her. In honor of her graduation, let us reflect on the words of Hugh Nibley.