There's been a lot of buzz recently about women executives (HBR calls it "executive feminism"--a term I absolutely love), largely due to Marissa's Mayer's new policy at Yahoo and Sheryl Sandberg's Lean In: a TED talk turned into a best-selling book. This should be a topic of conversation, especially since new research has shown that gender diversity improves company performance and increases collective intelligence (the more women, the better). Furthermore, the public views women as better leaders and with good reason. In a survey of 64,000 people across 13 countries, 66% agreed that the world would be a better place if men thought more like women. Half of this global sample (32,000) classified 125 traits as either masculine, feminine, or neutral. The other half was asked how these traits relate to leadership, morality, success, and happiness (with no discussion of gender). What was found is that those traits that the consensus defined as feminine are seen as being more vital to successful leadership (hence my voting pattern). Thankfully, businesses are beginning to adopt these "feminine values." This is known as the Athena Doctrine.


Before the city of Athens adopted its name, Poseidon (god of the sea) and Athena (goddess of wisdom) competed for the allegiance of its citizens. The two decided they would offer gifts to the people of the city, allowing them to choose their preference. Poseidon struck the summit of Acropolis and brought forth a salt water spring, while Athena caused an olive tree to miraculously sprout from the rocky terrain. Athena's gift was chosen over Poseidon's undrinkable spring due to the olive being "a major source of nutrition, even as it continues to be in the Mediterranean world today, whether eaten whole or crushed to make oil." It was also used as "a cleansing agent and emollient for the skin." Most important, the olive acted as "a source of fuel. Indeed, apart from wood, it was the most common fuel of the ancient Mediterranean." The olive tree has been seen as "a symbol for the Greek personality: hardy and tough, because it can take root and thrive even in meager soil, and individualistic, because no two olive tree trunks look exactly the same."[1] 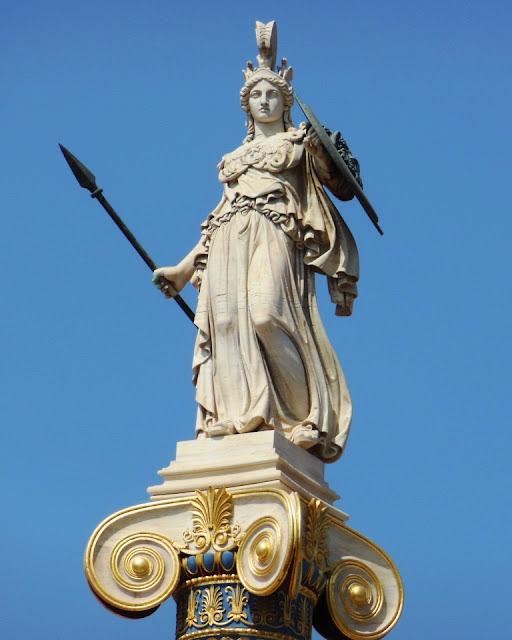 Yet, Athena isn't just the goddess of wisdom, but of courage, law, justice, strategy, just warfare, math, arts, etc. as well as the defender of cities and heroes. I thought about this the other day as my wife has been preparing for her board exams. She is currently a dental hygiene student at Texas Woman's University and will be graduating at the end of this semester. My wife is a far better student than I am (she's cuter too). Her determination makes me think of all the above traits attributed to Athena and her olive tree. I know she's exhausted from being so awesome. As one friend aptly put it, "She’s kicking scholastic ass so thoroughly...that she seems to have lost all the ass-kicking feeling in her ass-kicking boots." With eyes set on a master's degree, I have no doubt that she can and will rule the world someday (the portion that she wishes to, at least). It is because of women like her that the world is beginning to pay attention to female leaders and "executive feminism" (and rightfully so).

Here's to my Athena: keep on kicking ass. I love you and I'm proud of you.

1. Stephen Bertman, The Eight Pillars of Greek Wisdom: What You Can Learn From Classical Myth and History (New York: Fall River Press, 2007), 95-96.
Posted by Walker Wright