Over at MarketWatch, Rex Nutting (you know, the guy who said President Obama's spending binge never happened)[1] has an article claiming that uncertainty wasn't holding the economy back. Why? To oversimplify, the economy is still sluggish despite most policies being set. The only uncertainty that remains is that which is typical to the economy:


In fact, neither Congress nor the Fed is likely to change any policies at all between now and early 2015. It wouldn’t be a stretch to argue that there’s never been a time with less uncertainty about economic policy since World War II ended. That doesn’t mean uncertainty has gone away. There’s plenty of it, but it’s not about policy, it’s about the economy itself. Will any customers show up? Will the bank give us the loan? Will I have a job? Will the bull market continue? Where will interest rates go? Will China keep growing? Will Europe ever grow again? Will gasoline prices rise? Will home prices fall?

I've written about uncertainty and its effects before (prior to the election). And I'm not exactly convinced by Nutting's claim. The NFIB's Small Business Optimism Index saw a drop in June. NFIB chief economist Bill Dunkelberg explained, "It certainly doesn’t help that the endless stream of delays and capitulations of certain provisions of the healthcare law adds to the uncertainty felt by owners. Until growth returns to the small-business half of the economy, it will be hard to generate meaningful economic growth and job creation." This isn't just general uncertainty, but the leftovers of the Great Recession. It is helpful to review the NFIB's Dec. 2009 report: 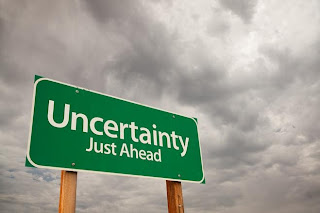 But the other major concern is the level of uncertainty being created by government, the usually source of uncertainty for the economy. The “turbulence” created when Congress is in session is often debilitating, this year being one of the worst. Themes including “tax more,” “tax the rich even more,” “VAT taxes,” higher energy costs due to Cap and Trade, mandates and taxes for health care, threats of “stimulus II,” incomprehensible deficits, and a huge pool of liquidity created by the Federal Reserve Bank that threatens price stability and higher interest rates. The list goes on and on. There is not much to look forward to here and good reason to “keep your powder dry.” Uncertainly is the enemy of the real economy as well as financial markets.

Uncertainty has been plaguing small businesses and business in general from the get go and continues to today. The NABE March 2013 Economic Policy Survey found a "wide agreement on the panel that uncertainty regarding fiscal policy still is contributing to a slower economic recovery. Nearly 80 percent of respondents held this view, down only slightly from the 87 percent reported in the September 2012 survey." It also doesn't help Nutting's case that the Federal Reserve Bank of San Fransisco recently published a study demonstrating that the U.S. labor market recovered more slowly after the Great Recession than previous recessions and largely due to high uncertainty regarding economic policy. Uncertainty "pushed the unemployment rate 1.3 percentage points higher by late 2012 than it would have been based on trends from the decade before the downturn." The St. Louis Fed reported in April 2013 that economic policy uncertainty was one reason that firms were hoarding cash as well as declines in real GDP and in real business fixed investment.

Even though economic policy uncertainty may be lower than the past few years, Nutting's case seems to be overstated. Uncertainty has definitely held the economy back.


1. See the responses from James Pethokoukis, Veronique de Rugy, and Glenn Kessler. Or take a look at the charts on government spending provided by the Mercatus Center at George Mason University.